Super Tuesday is a nation-wide count of commuting cyclists which takes place for two hours on the first Tuesday morning of March. Bike Adelaide takes part in this important annual event by helping to count riders at strategic intersections throughout Adelaide.

Super Tuesday volunteers have found this a rewarding experience, learning about cycling movements and contributing to real, hard data about cycling levels.

Bike Adelaide works in partnership with: 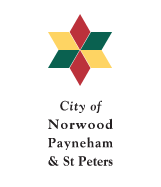 This year cyclists at 54 locations were counted by 59 volunteers.  (A couple of locations with historically large numbers of cyclists, or complicated movements, were assigned two volunteers.  Also several volunteers were asked to count pedestrians only.)

This year the City of Unley arranged with the Melbourne-based Bike Network to count at locations within its boundaries, including several that had formerly been counted by Bike Adelaide.

Locations counted for the first time were:

Most of these were part of our partnership with the City of Norwood, Payneham and St Peters.  The Hughes/ Sir James Congdon Drive location was an attempt to capture those cycling in from the suburbs between Henley Beach road and Sir Donald Bradman Drive.  The two new Adelaide locations were attempts to measure the many cyclists using the River Torrens Linear Park to ride in from the west.  The Electranet Bridge location also captured practically all of those riding in on the Outer Harbor Greenway.

You can look at the figures for each location by clicking on the map below. 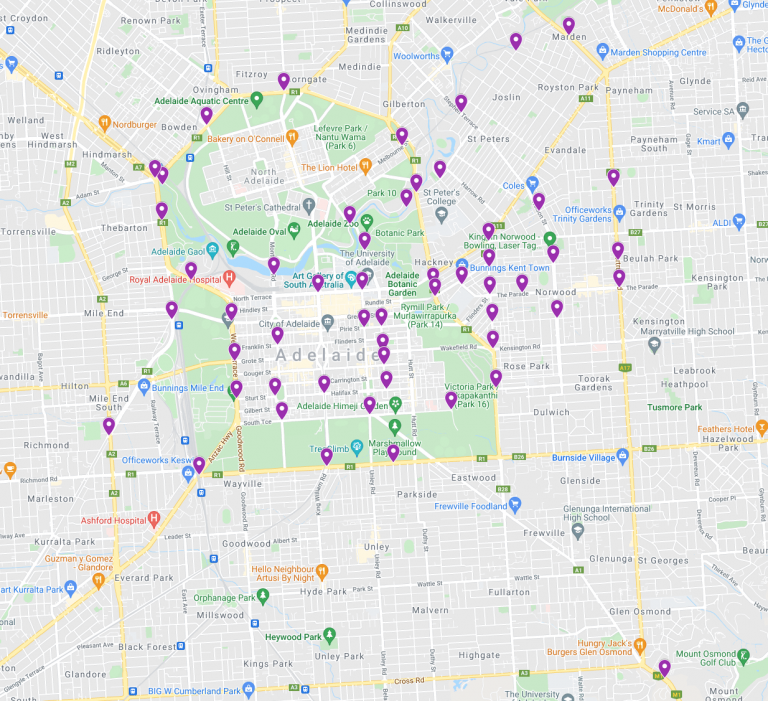 Interestingly, a slight majority (22 of the 42) of the locations had more cyclists than the year before, but the intersections that saw the falls tended to be the larger intersections in the City.  As a general rule, the larger the numbers counted, the more likely they were to be below those counted the year before.  Declines here can outweigh increases at many intersections further from the CBD.

The biggest fall in numbers was at the northern end of Pulteney Street. Pulteney/Pirie saw a 29% decline; Pulteney/ North Terrace, a 28% decline.

The 3% decline should be seen in the context of a broader decline in the numbers of visitors (shoppers, employees, students etc.) to the CBD.  The following two graphs present the impact of the Covid pandemic on visitor numbers in the first half of the past three years.  They have been drawn from a May, 2021 report to the Adelaide City Council, using data from sensors installed by the Council. 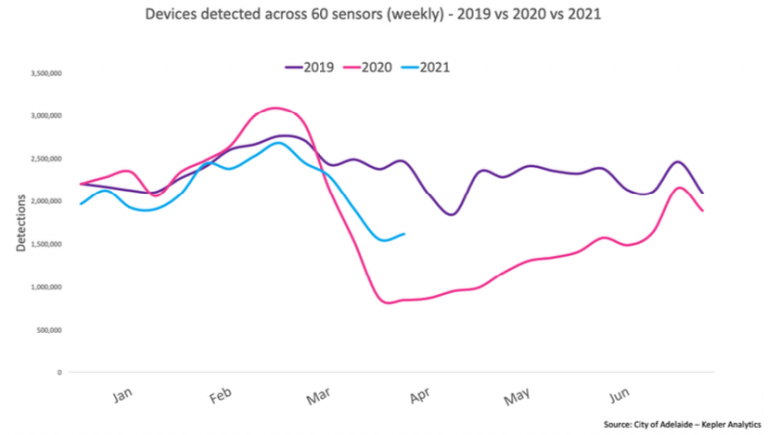 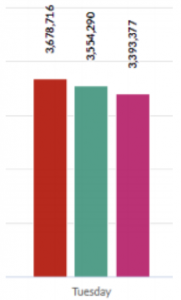 The presentation to Council does not indicate the location of the sensors.  We have noted above the big drop in cyclists counted at then northern end of Pulteney Street.  We suspect that the fall in numbers on the university campuses has fallen much more than overall visitor numbers, noting that the University of Adelaide campus was recently closed for a week to save money – an unprecedented experience.  Unfortunately however, we do not have figures on the numbers of students on campus.

Female cycling has increased over the history of the Super Tuesday counts, from percentages in the low 20s a decade ago, to the mid 20s in recent years. This year the proportion of cyclists who were female was 27%, the highest ever recorded and significantly higher than the 24% recorded in 2020.  48 of the 91 cyclists counted at the Hughes Street/ James Congdon intersection in Mile End were female – only the second time a majority of female cyclists has been recorded.  15 locations saw at least 30% female cyclists.  These are presented in Table 1.

A third trend of interest was the increase in “counterflow” cycling – people riding away from the CBD.  In fact some of those locations that saw increases would have recorded decreases if it were not for counterflow cycling: Pulteney/ South Terrace and Morphett/ South Terrace, for example.  An increase in the numbers riding away from the CBD was a common feature of this year’s count.  In some cases the increases were very large, but always off low bases.

A possible explanation of this phenomenon is City residents having the opportunity to get some exercise because they are working from home.

This pattern did not just apply to the City locations.  Beulah Road in Norwood saw a significant increase in counterflow cycling, as did The Parade, Porter Street, Grant Avenue, and (to a lesser extent) the Outer Harbor Greenway, Phillips Street and the western end of Greenhill Road at Anzac Highway.

This pattern was not seen at the Tollgate (where slightly more were riding toward the City and slightly fewer to the hills).  If it is City residents getting exercise, they are not getting that much exercise!

Bike Adelaide is happy to help Walking SA obtain data on people walking.  Particularly at quiet locations, our volunteers were kind enough to also keep a record of how many pedestrians passed through the location.

One explanation for this might be the increase in walking for exercise that was encouraged by the Covid lockdown.  But it should also be noted that, with one or two exceptions, pedestrians were not counted in the CBD itself – there are just too many of them to be counted and in any case counts at these locations probably measure the popularity of the CBD rather than the popularity of walking.  By excluding the big intersections that saw a decline in cycling, we perhaps have a more skewed picture of the relative trends in both modes.